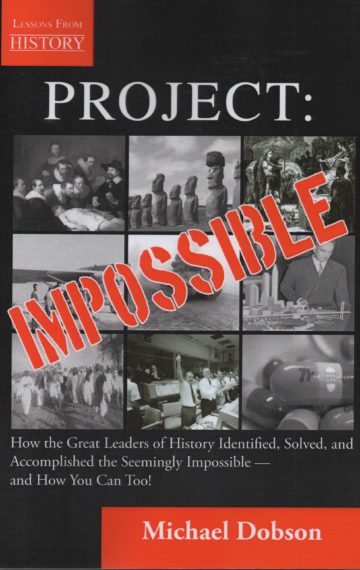 How the Great Leaders of History Identified, Solved, and Accomplished the Seemingly Impossible — and How You Can Too!

Officially, “nothing’s impossible,” but that implies unlimited time, resources, and flexible objectives. None of those apply to project managers. Our projects are impossible if they can’t be done within the constraints…but sometimes there’s a way around even the most challenging barrier.

What can you do when the situation looks hopeless? In this exciting journey through history, you’ll learn how the greatest leaders and project managers in history took on impossible challenges…and still succeeded.

In PROJECT: IMPOSSIBLE, you’ll learn a step-by-step methodology to achieve even the most difficult of projects. You’ll learn Dobson’s Laws of Project Management and discover the Godzilla Principle. From defining the problem to challenging the project parameters, you’ll know how to attack a seemingly impossible project…and get the job done.

Michael Dobson is no stranger to impossible projects. Author of over 30 books, he’s a best-selling expert on why it can’t be done…and how to do it anyway. Dobson helped build the Smithsonian Institution’s National Air & Space Museum, led one of the world’s leading game design teams, and has lectured on project management over 1,000 times on three continents.

Michael also does an award-winning keynote on impossible projects. Visit the Keynotes and Seminars page for more information. For details, email Michael at the link below.